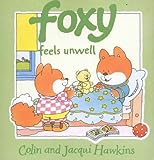 Foxy feels unwell ISBN: 9780006647584
Hawkins, Colin and Jacqui
Published by HarperCollins, 2001
Foxy is hot and cross and doesn't want to play with little sister. When he wakes up in the morning, he is covered with spots - chicken pox. He feels grim, but little sister looks after him, getting him drinks and reading him stories and soon he is better. His friends have chicken pox too, so they are able to play, but little sister is now cross and hot and not wanting her food. Inevitably, she has chicken pox too, and Foxy promises to look after her. Jolly pictures will cheer up pox-ridden children. Great fun!
Age: 3+
Categories: